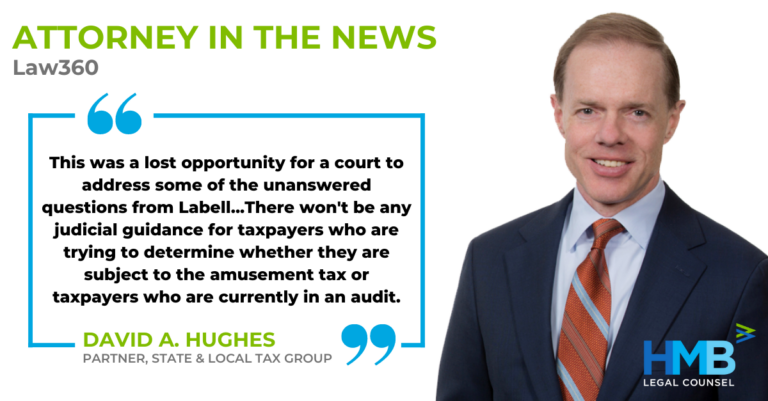 Apple recently settled its challenge to the city of Chicago’s amusement tax.

This past March, the court threw out Apple’s challenge because its allegations were too generic to support a cause of action. This surprised David A. Hughes because tax matters are rarely dismissed for failure to sufficiently state a claim. Apple was allowed to file a second amended complaint, which was due by July 15, 2022.

The tech powerhouse initiated its complaint in 2018 against the amusement tax and focused on the tax’s application to its music streaming services. However, the case was put on hold due to another dispute against the city’s amusement tax, Labell v. City of Chicago.

David told Law360 that Apple's case was postured differently from Labell's because it was filed as a challenge based on the company's business activities rather than as a complaint from customers who paid the tax on streaming services from certain businesses.

Some businesses that had hoped the Apple case could shed light on how the tax might apply to their services will be left with open questions, David commented.

"This was a lost opportunity for a court to address some of the unanswered questions from Labell," David said. "There won't be any judicial guidance for taxpayers who are trying to determine whether they are subject to the amusement tax or taxpayers who are currently in an audit."

Even if Apple had decided to replead its case, Labell may have proved to be a difficult hurdle for the company to overcome, David added. He said that while the court left the door open for Apple to further flesh out its claims against the tax through another amended complaint, it wasn't that shocking that Apple chose to drop the dispute.

"I don't know what Apple's thinking was as to why they ultimately settled,” David said. "But given the challenge of pleading the necessary facts, coupled with what Labell has already ruled … it doesn't surprise me that they would walk away."