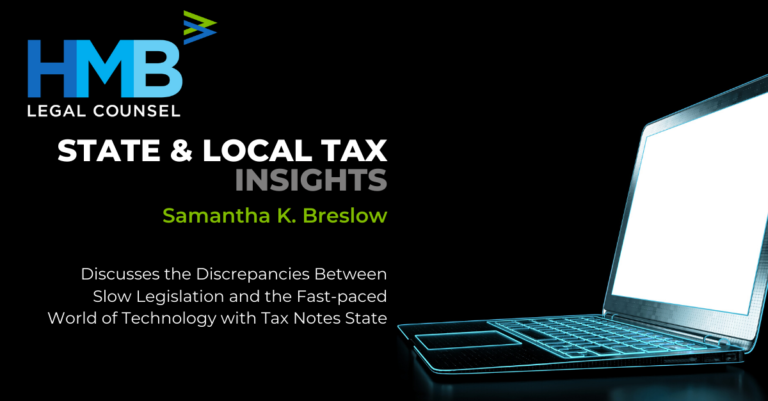 Samantha Breslow discusses how the sluggishness of legislation does not often adjust itself to the speed and terminology of technology. However, there are a few states that are adapting to overcome the discrepancies. Download a PDF of the full article here.

Technology is moving faster than state legislatures can react — much faster. The lag in a proactive response means that states generally still define the taxability of software in rigid, outmoded terms, such as canned or custom, and place too much significance on the delivery of the software, whether by electronic download or via load and leave. These terms were largely adopted by states grappling with a lack of guidance and seeking to compartmentalize software as either tangible personal property or services. However, the terms lack the nuance and sophistication to properly distinguish evolving types of software, including cloud-based software.

Although there are numerous deficiencies in state legislation, this article focuses on two key examples of outmoded terminology in state tax legislation and anticipated efforts by states to address these uncertainties.

I. Do the Terms ‘Canned’ and ‘Custom’ Still Hold Weight?

However, the distinction between canned and custom software is tenuous. Most states generally define custom software as software designed and developed by the author or other creator to the specifications of a specific purchaser.[3] However, this is usually the extent of the guidance, as canned or pre-written software is often defined in the alternative as computer software that is not custom software.[4] As a result, taxpayers are often left with limited guidance, especially in the context of modified software. This has led to states moving away from including this language in their statutes.

A prime example of a state disregarding this binary treatment of software is the Alabama Supreme Court’s recent decision in Ex parte Russell County Community Hospital LLC v. State Department of Revenue.[5] Pointing to Ala. Admin. Code r. 810-6-1-.37(5), the hospital filed a refund claim for sales taxes paid on computer software, arguing that it purchased nontaxable services in the form of custom software programming. At the time of the decision, the regulation defined custom software programming as “software programs created specifically for one user and prepared to the special order of that user.”[6] Further, the term “custom software” included
“modifications to a canned computer software program when such modifications are prepared to the special order of the customer,” although “only to the extent of the modification[s]” and only to the extent the modifications are separately invoiced to the purchaser.[7]

Relying on its prior decision in Wal-Mart Stores v. City of Mobile,[8] the court held that “there is no distinction for Alabama sales-tax purposes between canned or custom software.”[9] Rather, “all software, including custom software created for a particular user, is ‘tangible personal property’ for purposes of Alabama sales tax.”[10]

However, if a seller tenders an invoice for separately stated nontaxable services that accompany the conveyance of software, such as determining a particular software user’s needs, designing and programming new software for a particular user, modifying or configuring existing software programs to meet a user’s needs, installing software, or training users to operate software, those services are nontaxable.[11] As a result, this case represents a departure from the state’s historic distinction between canned and custom software.

C. What’s Next for Characterizing Software?

Alabama may be at the forefront of a wave of states to move away from these rigid terms and to instead focus on the services performed related to
the software. In response to this decision, the Alabama Department of Revenue proposed amendments to its administrative regulations on computer software in August. If adopted, the amendments will reflect the court’s decision and eliminate references to “canned computer software” and “custom software programming.”[12] The move makes sense as custom software is becoming increasingly more difficult to define. Although software companies often mistakenly view software as custom when an off-the-shelf platform is substantially customized to the user’s requirements, most states still consider the software to be pre-written or canned.[13] The result is that few software programs benefit from taxfree treatment as truly custom.

However, is this change in treatment groundbreaking? Arguably, no, as many states already treat separately stated charges to customize software that are designed and developed to the customer’s specifications as not
subject to tax.[14] As a result, although Alabama’s disregard of the binary terminology of canned versus custom appears novel, the practical application is that they are just codifying the nontaxable treatment of modifications already commonly adopted by many other jurisdictions.

A. Adoption and Significance of the Meaning

The other significant factor that determines whether software is subject to sales and use tax is the means of delivery, including whether it is electronically downloaded, transferred via physical media, or delivered via “load and leave.” Ask a software developer whether software was delivered via load and leave and they may seem puzzled because not only is the term outmoded, but it is hardly a part of the nomenclature of the digital world. But before the internet provided the bandwidth for the electronic delivery of software, taxpayers could only receive software via load and leave or load and return. Although the taxability of preloaded software was first
addressed by a state in a repealed 1999 Pennsylvania ruling, load and leave received widespread acceptance after appearing in the original draft of the Streamlined Sales and Use Tax Agreement adopted in November 2002.[15]

The SSUTA defines load and leave as “delivery to the purchaser by use of a tangible storage media where the tangible storage media is not physically transferred to the purchaser.” In practice, the term refers to the means of delivery of software. Rather than a customer downloading the software or accessing it via the cloud, the creator loads it onto the customer’s computer by a physical medium, such as a compact disk, floppy disk, or external hard drive, and then takes back the physical copy.

There are 23 SSUTA full member states, meaning that the state is in compliance with the SSUTA and its laws, rules, regulations, and policies.[16] As a result, the term “load and leave” has been added to many states’ statutes or regulations.[17] For example, although some streamlined states reacted quickly, such as Minnesota, North Dakota, and West Virginia, which amended their statutes in 2003 to include the term, nonmember states such as Colorado lagged behind, not adding it until 2011.[18]

The means of transfer of software is significant in determining whether it is subject to sales and use tax.[19] However, there is no generally applicable rule. Whereas some states only tax canned software when there is a physical delivery of tangible personal property via load and leave, other states tax canned software regardless of the means of transfer, including electronically downloaded software.[20] For example, in the most recent significant decision addressing load and leave, FileNet Corp. v. Director of Revenue, the Missouri Administrative Hearing Commission held that a load and leave transfer of canned software was not subject to use tax because the transfer did not constitute a sale of tangible personal property.[21] After reviewing evidence that a “person cannot see or touch software” delivered via a USB drive, the commission determined that the software was a nontaxable intangible because it was not “delivered in a tangible medium.”[22] By narrowing the scope of software “delivered in tangible medium” to only those outdated items identified in Missouri’s regulation, such as a CDROM and magnetic tape, the commission further limited the taxability of the already aging term “load and leave.”

B. Is Load and Leave Now Obsolete?

Despite the widespread adoption of the term, did “load and leave” go the way of the floppy disk or compact disk? That’s a loaded question. Because of the decline of physical media, states’ adoption of the term is a step behind — most computers no longer feature an optical drive.[23] The demise of the optical drive is the result of several factors, including consumer pressure to reduce the size of laptops, the diminished need for physical media, and the rise in capacity ofsolid state drives.[24] Although some taxpayers —such as government entities — are resistant to electronic transfer because of security concerns, considering that most computers no longer feature a computer optical drive, the use of load and leave software is uncommon. Instead, taxpayers more frequently remotely install software on a customer’s computer using the cloud.

As the electronic delivery of software increases, will states divert from taxing software based on the means of delivery? For a state interested in increased sales tax revenue and simplification of its laws, it may be a prudent move. States that differentiate between software delivered electronically or by load and leave often leave sales tax dollars on the table. For example, states, such as Iowa and Oklahoma tax prewritten software delivered via load and leave, but sales of pre-written computer software that are delivered electronically are exempt from tax.[25] As a result, most sales of software escape taxation in these states, which is a precarious result from a revenue perspective. To simplify the applicability of their laws, these states could amend them to follow Ohio, which already taxes pre-written software regardless of the mode of transmission.

Alternatively, if a state elects to be even more aggressive, it can mirror Mississippi, which taxes gross receipts from computer software or program sales, regardless of the means of transmission or whether it is characterized as prewritten or custom.[26] If states experience a financial
dip, resulting in increasing expenditures and decreasing revenues, this simplification of the law may be a solution to create additional revenue.

No matter how states react to recent changes in technology, one thing is for sure: Their reaction will be slow. States and localities are still struggling to characterize the taxability of software using rigid and outdated terms that do not allow for the flexibility that is necessary in an evolving industry. Although defining software as either canned or custom perhaps made sense in an economy of tangible goods, the terms lack the
nuance to properly distinguish complex services and varied digital products. Further, considering the ease and accessibility of electronic downloads, limiting taxability based on the mode of transfer now appears shortsighted and could result in states overlooking key sources of sales tax
revenue.

[9] Ex Parte Russell County Community Hospital. The court determined that although software was originally considered intangible property because it was the information and not the medium that was being sold, because the state became proliferated with “canned” computer software in the 1990s that was conveyed via a tangible medium, software has become tangible personal property. Wal-Mart Stores v. City of Mobile, 696 So. 2d 290, 291 (1996).

[13] For example, New York treats the combining of two or more prewritten software programs or pre-written portions of such programs as pre-written software. N.Y. Tax Law section 1101(b)(6); NY Sales Tax Bulletin No. TB-ST-128 (Aug. 5, 2014). Only software uniquely designed and developed for a specific purchaser is excluded as nontaxable custom software. Id.

[16] A list of current SSUTA member states is available online.

[19] Central to determining delivery is the method of delivery indicated on the taxpayer’s invoice, purchase contract, or other documentation. Some states, such as Georgia, presume that if the taxpayer does not meet its burden in establishing electronic transmission, delivery will be presumed to have been made through a tangible medium. Georgia Letter Ruling, No. LR SUT-2018-10 (Aug. 7, 2018).

[22] Id.; Mo. Code Regs. 10-109.050(3)(A) (“Examples of canned software delivered in a tangible medium would include coding sheets, cards, magnetic tape, CD-ROM or other tangible electronic distribution media on which or into which canned software has been coded, punched or otherwise recorded.”).