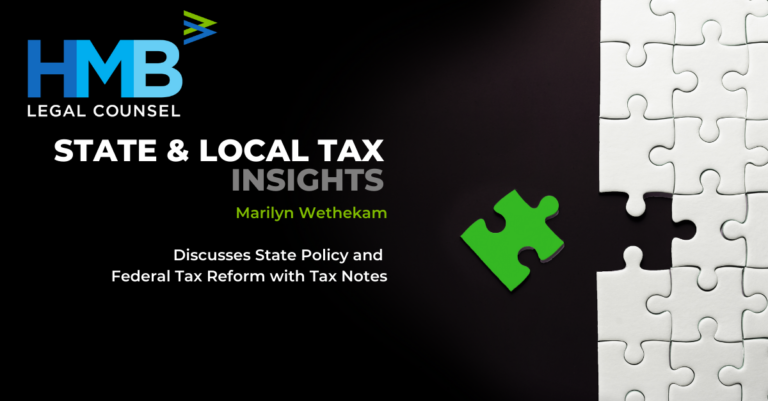 The 2017 enactment of the Tax Cuts and Jobs Act made significant changes to the federal tax system. One of the drivers for the reform was to make the United States more competitive in the world markets, thereby stimulating economic growth. Also, the revisions to the Internal Revenue Code were designed to move the federal tax structure from the worldwide system to a territorial tax system.

The policy drivers for the TCJA were not necessarily consistent with existing state tax policy or state tax schemes. Further, the tax benefits provided as a result of implementing those policies did not filter down to the state tax level. In some instances, the federal tax reform provisions created a revenue windfall at the state level. More importantly, as a result of layering the TCJA provisions on existing state tax policy,1 the state tax administrative burden has increased — significantly in some instances. Thus, the intersection of federal tax reform and state tax policy has given rise to numerous issues, the resolution of which are complicated by the lack of guidance both at the federal and state levels.

The limitation applies to all taxpayers except certain small business, regulated public utilities and electric cooperatives and farming, and real property trade or businesses that have elected for the limitation not to apply.

For state tax purposes, the fundamental question that one must ask is: Did the state adopt new section 163(j) or has it decoupled from the provision? If the taxing jurisdiction has not automatically adopted the new provision because of rolling conforming with the IRC or has specifically decoupled, then a taxpayer must determine if the expense limitation in place before the 2018 tax year applies.5 If a tax jurisdiction decouples from the new provision, there may be no limitation on the business interest expenses deduction unless the thresholds under old section 163(j) are met. The failure to adopt or decouple from section 163(j) may require a taxpayer to separately track interest expense deductions by state, which creates an additional administrative burden.

If a taxing jurisdiction adopts section 163(j), how is the limitation computed for state tax purposes? For federal tax purposes, ATI is defined, and the logical assumption would be that the federal definition also applies at the state level. However, there is a possibility that state modifications for computing state taxable income could and would impact the computation. For example, several states have their own net operating loss computation that does not track the federal computation. At the federal level, there is no distinction for gains not allocable to a trade or business, but states are restricted as to what income may be subject to tax. Thus, the way a gain is characterized at the federal level may not be the same characterization at the state tax level. This mismatch between federal adjusted gross income and state taxable income could result in the state limitation not being 30 percent of state taxable income. To date, there has been little guidance issued on the computation of ATI at the state tax level and what, if any, modifications should be made to the federal computation of ATI.

More perplexing is the interaction of the provisions of section 163(j) with the various state return filing methods. For federal tax purposes, a consolidated group is characterized as a single taxpayer. However, that characterization complicates the application of the limitation in those states that have adopted a separate return filing method or a filing method that does not mirror the federal method. If the federal consolidated group reports an interest expense limitation, how is the limitation allocated to members of the group to determine the state limitation? Pennsylvania is one of the few states that has issued guidance. The Department of Revenue advised that each member of the federal consolidated group will be required to perform its own set of calculations on a separate company basis to determine if the interest expenses limitation applies to it.6

One of the key questions is the ordering of the limitation. States that have issued guidance have indicated that the federal limitation is computed first — then the state addback statute is applied. That ordering raises a limitation question: If the entity has both related-party and third-party interest expense, what, if any, portion of the post-limitation deduction would be subject to the addback provision? Alternatively, should an adjustment be made to the state interest addback to compensate for the fact that a portion of the related-party interest was included in the federal limitation? The state addback statutes contain exceptions or safe harbors. However, to apply the exception or determine if the safe harbor applies, the taxpayer must be able to identify the source of the expenses. The lack of a distinction regarding the expense at the federal level makes the determination difficult at best.

For federal tax purposes, the amount of disallowed deductions may be carried over to subsequent years. There is a question as to whether states will allow a similar carryover of the disallowance expenses. Assuming the carryover is allowed, would a taxpayer be required to track the carryover on a separate-entity basis at the state level, or rely on the federal carryover amounts that may not be the same? State apportionment methods will also factor into the carryforward computation.

As evidenced by the state tax issues raised with the adoption of section 163(j), the intersection of federal tax reform and state tax policy is not smooth. The lack of guidance at the state and federal levels has further complicated the application of the business interest expense limitation. Finally, what may be a key factor causing the turbulence is that the drivers for federal tax reform are not aligned with state tax policy.7

1 The complexity is compounded by how the states adopt the IRC; the filing method employed by the state and whether, for policy reasons, the has state tax decoupled from specific IRC provisions.


2 Adjusted taxable income is computed without regard to:

6 Corporate Tax Bulletin 2019-03 (Apr. 29, 2019). New Jersey issued TB-87 on April 12, 2019, to address the computation of the section 163(j) limitation for separate return files. It appears that the taxpayer will use the federal allocation method as a pro rata calculation for New Jersey purposes. The statutory related-party addback will be applied after the section 163(j) limitation. The tax bulletin also provides guidance for combined return files. Tennessee issued Notice No. 19-18 to address the treatment of its business interest expense deduction.