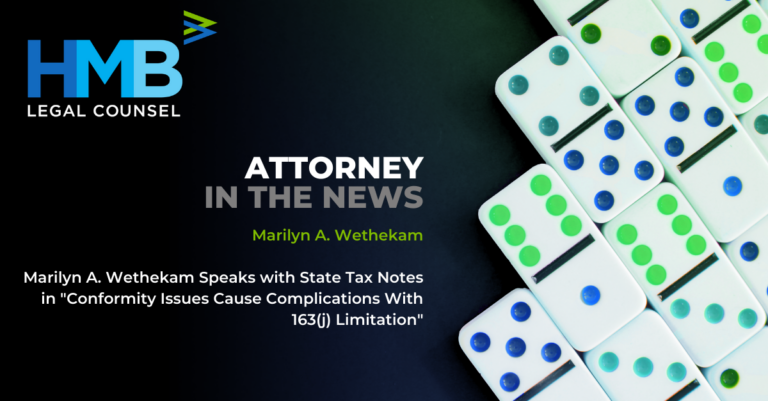 Federal tax code conformity and mismatches between federal and state taxable income can cause difficulties with the business interest expense limitation under IRC section 163(j), according to tax forum panelists.

Marilyn A. Wethekam said that, in her opinion, the section 163(j) limitation provision under the Tax Cuts and Jobs Act has created significant issues and is probably one of the hardest to administer.

Wethekam added that taxpayers can elect to opt out of the 50 percent limitation and use the 30 percent limitation instead, and can elect to use their 2019 interest expense computation to determine their limitation for 2020. She continued that this provision was likely an effort to resolve some of the economic downturn that may happen because of the pandemic, but said the provision could cause issues at the state level.

Wethekam noted that there may also be mismatches between a taxpayer’s ATI at the federal level and ATI at the state level because of the differences in filing methods and because states may require additional adjustments when computing state taxable income.

Charles Britt of RSM US LLP said that conformity issues have also popped us as states address the CARES Act provisions. He continued that both Colorado and North Carolina decoupled from section 163(j) by requiring an addback, but neither state provided a corresponding subtraction for interest expense for future years. He added that hopefully this will be fixed because it seems an unfair and unintended consequence.

Jessica Morgan of EY said that a distribution may or may not have the same state tax consequences as it does for federal purposes because of mismatches in how and when the governments taxed these earnings, adding that the TCJA complicated the entire fact pattern with the IRC section 965 transition tax and global intangible low-taxed income provisions. Morgan also said that GILTI can potentially be all of a controlled foreign corporation’s net earnings, adding that this is “creating a sea of previously taxed earnings and profits, so whether or how a state conformed to both the transition tax and . . . GILTI . . . create a tremendous amount of uncertainty about when and if you’ll have a state tax liability.”

Morgan said that a New Jersey regulation released in April states that a taxpayer can exclude previously taxed subsidiary dividends from its entire net income in a year to the extent the dividends were previously taxed by New Jersey. Morgan noted that the taxpayer must also have paid at least the $2,000 minimum tax to the state in that previous tax year to get the treatment under the regulation.

Morgan continued that this is a problem in very common fact patterns, such as if the taxpayer was in a loss year and didn’t hit the minimum tax or if the dividends were paid to entities that didn’t have nexus in the state for those years, noting that New Jersey remained a separate filing jurisdiction during the section 965 years.