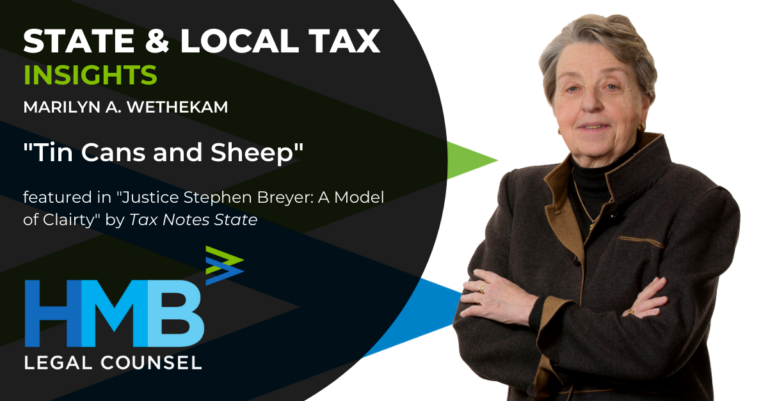 In this issue of Board Briefs, Marilyn A. Wethekam and other advisory board members discuss Justice Stephen Breyer’s legacy and what his retirement will mean for the state and local tax community. Read the entire Board Briefs here (subscription required).

During his 28 years on the Supreme Court, Justice Breyer has played a role in both interpreting and shaping state tax law. Justice Breyer's decisions have addressed the application of the equal protection clause's rational basis standard to state taxes, the use of the tonnage clause to strike down a personal property tax, and the preemptions found in treaties between the U.S. government and Indian nations. More importantly, his influence in shaping state taxes can also be found in his commerce clause discrimination decisions. The second of his three commerce clause decisions, Hunt-Wesson was a case my firm handled, and it stands out in my mind not because of our involvement but because of the active role taken by Justice Breyer in the oral argument.

At issue in Hunt-Wesson was California's method for computing the taxable income. Specifically, at issue was the statutory limitation on deductions for interest expenses – the interest offset provision. The statute in question limited a taxpayer's deduction to the amount by which the taxpayer's interest expenses exceeded any nonbusiness interest and dividend income. Justice Breyer is known for his questioning style that generally includes hypotheticals that rival those used on law school exams. His questioning during the oral argument did not disappoint those of us in attendance. In response to an explanation by Professor Hellerstein that the statute swept nontaxable income into the tax base resulting in the taxation of extraterritorial income as well as discriminating against non-domiciliary corporations, Justice Breyer posed a hypothetical. The hypothetical involved a tin can company selling throughout the United States that owned a Mongolian sheep farm. The purpose of the hypothetical was to probe how the California treatment of nonbusiness income and the offsetting of related expenses differed from that of other states, particularly Illinois. The tin can company/sheep farm hypothetical, much to the amusement of those of us listening, carried throughout Justice Breyer's questioning of the Franchise Tax Board's counsel. The hypothetical that took on a life of its own was clearly framed to assist in analyzing the interest offset provision under both the due process and commerce clauses.

Justice Breyer, writing for a unanimous Court, held that the taxing scheme – the interest offset provision –  violated both due process and the commerce clause. The statute that limited the deduction to the amount that interest expenses exceed nonbusiness dividend and interest income, impermissibly taxed income earned outside California's jurisdiction. Further, the Court held that the interest offset provision pushed the proportional allocation concept past reasonable bounds. Thus, the statute did not provide a reasonable allocation of the expense deduction relative to the income that the expenses generated. The tin can company/sheep farm hypothetical played prominently in Justice Breyer's decision. The example was used to illustrate why the interest deduction limitation was in fact a tax on non-unitary income because the limitation denied a portion of a deduction from unitary income that had nexus with California. The hypothetical was also used to illustrate why California's assumption that funds are borrowed to support non-unitary operations was unrealistic. Who could have predicted that a tin can manufacturer and a New Zealand (or sometimes Mongolian) sheep farm would have played a key role in analyzing a state tax statute from both a due process and commerce clause perspective? The due process and commerce clause analyses found in Hunt-Wesson are important for setting the state's jurisdictional parameters as well as the application of the dormant commerce clause in state taxation.

Justice Breyer's opinions, and his dissents, have helped to shape the state tax landscape over the past 28 years. The open question, as the makeup of the Court evolves, is whether the Court will continue to build on the foundation laid by Justice Breyer.