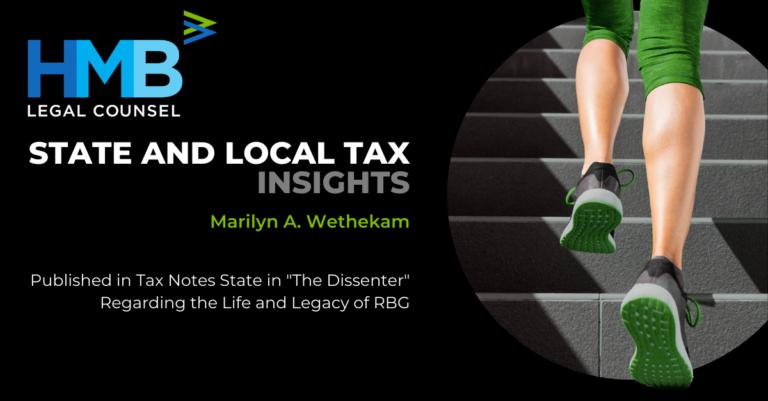 In this excerpt in Board Briefs from Tax Notes State, Marilyn honors the late Supreme Court Justice Ruth Bader Ginsburg.

On September 18, 2020, this nation lost not only an exceptionally accomplished jurist but a powerful voice for gender equality and those who have been made to feel they don’t belong. Justice Ruth Bader Ginsburg broke the glass ceiling and showed those of us who came behind her in the law that we belonged and had opportunities to change the world. As she said, “If you are going to change things, you have to be with the people who hold the levers.”[43] Throughout her career, including in her 27 years on the Court, Justice Ginsburg made sure she was with the people who held the levers.

As the first director of the American Civil Liberties Union’s Women’s Rights Project and a staunch advocate for gender equality, she argued six cases before the Court — winning five, which resulted in the beginning of the Court striking down statutes that differentiated based on gender. Her decisions and forceful dissents echoed her goal not only of dismantling the artificial legal barriers to women’s equality but also protecting everyone’s fundamental rights, such as the right to vote.[44]

We can all learn from Justice Ginsburg’s determination to persevere in the face of what may be considered insurmountable obstacles. As the Court shifted, Justice Ginsburg found herself in the minority, but she used that role to her advantage. Known as “the Dissenter,” her dissents were intended to persuade. That persuasion can be seen in the 2009 enactment of the Lilly Ledbetter Fair Pay Act.[45] The lesson to be learned is that as we encounter positions that differ from our own, we should attempt to persuade rather than create acrimony.

While known as an advocate for equal rights, Justice Ginsburg also played a role in shaping state tax policy. Her decisions and dissents set forth her belief that states had the ability to tax the worldwide income of their residents. She wrote the majority opinion in Barclays Bank,[46] which upheld California’s worldwide combined reporting and concluded that the tax scheme did not place an undue burden on the foreign-based multinational entities. And, writing for a unanimous Court, Justice Ginsburg concluded that Oklahoma was allowed to tax the income of members of the Chickasaw Tribe who lived outside the tribal lands.[47] Drafting the dissent in Wynne,[48] she argued that a fundamental principle of taxation allows a state to tax all the income of its residents, even income earned outside the taxing jurisdiction. Most recently, Justice Ginsburg joined the majority in Wayfair,[49] upholding the South Dakota statute. These decisions and dissents will continue to shape the focus of state policy.

Those of us who came behind Justice Ginsburg owe her a debt of gratitude for breaking the ground and paving the way for our careers and instilling in us the belief that we in fact do belong. Her storied career shows us that professional disappointments are character builders and building blocks that lead to successes, sometimes in unexpected ways. Justice Ginsburg’s tenacity showed us that doubts or resentments encountered along the way should never affect our own self-worth. Her ability to persuade showed us that dissents can indeed result in change rather than just spark divisions. More importantly, her wisdom imparted on leadership is a mantra we should all live by: “Fight for the things that you care about, but do it in a way that will lead others to join you.”[50]