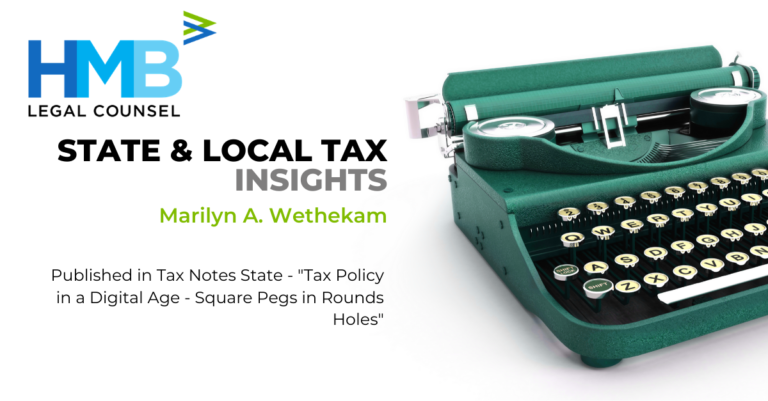 In her excerpt from the first installment of Board Briefs in 2020 from Tax Notes State, Marilyn addresses tax issues related to the digital economy.

Generally, you cannot put a square peg in a round hole. However, that is precisely what may be occurring as a result of the meteoric growth of the digital economy. One need only look at the approach taken by state and local taxing authorities not only to understand the intricacies of this new economy, but also the development of tax policies to address those intricacies to realize square pegs are being forced into round holes.

The development of tax policies to address the digital economy has taken one of two basic avenues. There are those taxing authorities that have sought legislation to modernize their tax base. The goal of the legislation is to capture the sales of digital products and cloud services such as platform as a service, software as a service, and infrastructure as a service,[42] as well as the recent movement to tax digital advertising. While some taxing authorities choose to modernize their tax policy through legislation, others choose to
modernize the tax base by reinterpreting existing statutes to capture the digital economy. From the taxpayer’s perspective, this second approach creates uncertainty and makes compliance challenging at best.

The city of Chicago is an example of a tax authority that has developed its policy by reinterpreting its ordinances. In 1974 Chicago enacted a lease tax that was imposed on the lease or rental of personal property in the city, or the use in the city of personal property leased outside the city. In 1994 the tax was renamed the personal property lease transaction tax (lease transaction tax) and amended to include the term “nonpossessory lease”[43] to capture transactions in which the use but not possession was transferred. The concept of a non-possessory lease included the non-possessory use of a computer primarily for the purpose of allowing a customer to access and use the provider’s computer to input, modify, and retrieve data.[44] There is an entire generation of tax professionals who remember that a dedicated computer was required to access Lexis and other research materials. This was precisely the target of the non-possessory computer lease.

The era of the dedicated computer is long gone. As a result of technology, the way the possession and use take place has significantly changed. No longer is software located at a customer’s location. Rather, it is likely accessed remotely through cloud subscription services. Business models have changed with the use of software as a service, platform as a service, and infrastructure as a service. While technology has changed the language of the lease transaction tax has not changed, but the city has expanded the tax to capture this digital use. The expansion of the tax has been accomplished by reinterpreting the ordinance through the issuance of rulings. Ruling 12 was issued in July 2015 to provide guidance on the application of the lease transaction tax to nonpossessory computer leases. Specifically, the ruling provides guidance on the application of exemptions that are found in the ordinance. The city acknowledged that Ruling 12 was a change in interpretation of the exemptions contained in the ordinance. One example of the change is the exemption for “fleeting and transitory” information. The exemption was narrowed by Ruling 12 to apply only if the receipt is simply a passive receipt of information. Thus, without amending the language of the ordinance, the lease transaction tax would generally now apply to an interactive web subscription service. Clearly, not contemplated in 1994 when the term “nonpossessory lease” was added to the ordinance. However, a concept that is captured merely by reinterpreting the ordinance.

The Chicago approach to modernizing its tax structure to capture the digital economy presents a fundamental tax policy question about how changes to a tax structure should be accomplished. The goal of any tax structure or policy should be taxpayer voluntary compliance with tax statutes. However, to achieve that goal, taxpayers need certainty on the application of the taxing statutes. Developing tax policy and modernizing tax structures using the legislative process provides several benefits. First, it allows interested parties the opportunity to both engage in a dialog with the taxing authority and voice concerns with the proposed policy changes. Second, the legislative process provides transparency and certainty regarding the application of the tax. A ruling process that does not solicit taxpayer input does not provide the transparency and certainty that is needed to achieve the goal of voluntary taxpayer compliance. The continued reinterpretation of statutes through rulings rather than legislation ultimately results in round pegs being forced into square holes.

[43]The term is broadly defined to cover any payments for which “the customer obtains access to the provider’s computer and uses the computer and its software to input, modify or retrieve data or information.” The definition would include time-sharing or other use of a computer with other users. Code section 3-32-020(i).

[45]The Illinois Supreme Court on March 25 denied the Petition for Leave. Therefore the Appellate Courtʹs decision that the tax was constitutional remains in place. Labelle et.al. v. City of Chicago, Ill. S. Ct. No. 125581.