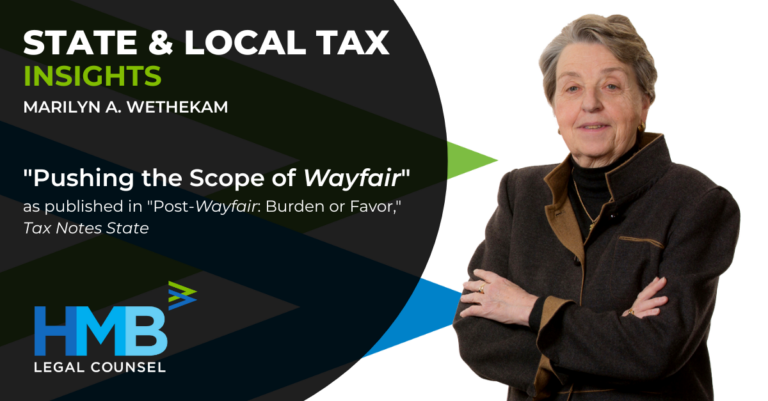 In this installment of Board Briefs, Marilyn A. Wethekam discusses the impact of South Dakota v. Wayfair four years later. Read the entire Board Briefs article, "Post-Wayfair: Burden of Favor," here.

Pushing the Scope of Wayfair

It has been four years since the Supreme Court issued its decision in Wayfair.[42] A fundamental question is how the decision and the concepts articulated by the Court have changed the state tax landscape. Also, what issues continue to linger due to the changes in the landscape? To address these questions, it is important to take a step back and examine what the Court held and how those concepts have been interpreted and applied by taxing jurisdictions. The Court applied both a due process and commerce clause analysis in reaching the holding that physical presence was an unsound standard and not required to obtain jurisdiction over a retailer for purposes of collecting sales tax.[43] In so doing the Court once again blurred the lines between the due process and commerce clause restrictions. The result was that economic and virtual contacts with a taxing jurisdiction now replace the physical presence jurisdictional requirement for sales taxes.

These contacts are now measured by sales dollars and numbers of transactions. The Court, while recognizing the South Dakota threshold to be reasonable, did not specifically conclude that the threshold was the floor for determining what was sufficient economic or virtual presence. The lack of confirmation opened the door for speculation as to whether there is such a concept as a constitutional minimum standard, and if so, what it is. Also not addressed was a commerce clause issue related to what type of collection requirements would result in placing an undue burden on interstate commerce. The lack of guidance on these items is a contributing factor to the lingering Wayfair issues.

Over the last four years both state and local tax jurisdictions have been interpreting the Court’s decision in the development and implementation of a tax collection framework. The unanswered questions and issues arising because of the taxing jurisdictions’ implementation of the decision are fundamental to any analysis of whether the Wayfair decision was a favor or a burden. In a post-Wayfair world, to impose a collection requirement on a remote retailer, that retailer’s activities must exceed specific thresholds. The concept sounds simple enough. However, it raises the question of how the threshold is computed. For example, does a retailer use gross or net receipts to compute the threshold? Are wholesale or sales for resale included in the computation? How does one account for related-party sales? If the retailer sells on both a marketplace and through its own website, do all the sales count toward meeting the threshold? As transactions become more complex, the uncertainty is magnified. The devil is in the details. While taxing jurisdictions have issued guidance addressing some of the issues, there is a lack of uniformity. The unanswered question is whether the lack of uniformity could rise to the level of placing an undue burden on interstate commerce.

Local taxing jurisdictions, while professing to adopt the concept of economic nexus, have been slow in providing guidance as to how the concept will be implemented. The lack of guidance requires taxpayers to speculate if the thresholds are the same as the state thresholds. In other words, to impose a collection requirement, the retailer activities in the local jurisdiction must meet the dollar and transaction threshold imposed by the state.[44] Assuming the same threshold applies, under this structure a compliance obligation is created. A retailer would be required to determine if it met the threshold in each local jurisdiction into which it sold goods. There is a question whether tracking the data necessary to determine if the threshold has been met and the compliance obligation created rises to the level of an undue burden.

Alternatively, does acquiring economic nexus at the state level automatically result in economic nexus at the local level, regardless of the sales dollars or number of transactions made in the local jurisdiction? The question yet to be addressed is whether this approach runs afoul of what the Court concluded in Wayfair protected against placing an undue burden on interstate commerce.[45] In general, home rule jurisdictions have their own tax structures. While the home rule jurisdiction may be limited by either the state constitution or statutes as to the types of taxes that can be imposed, the local tax structure may not be the same as the state tax structure. As a result, the state safe harbor threshold may afford no protection at the local level. More importantly, there may be no uniformity in the definition of a taxable transaction. Local jurisdictions are free to determine what products or services are subject to tax and at what rates. Thus, the uniformity factor relied upon by the Court to mitigate the undue burden on interstate commerce may not exist. Is the lack of uniformity alone sufficient to run afoul of commerce clause protections, or is more required?

The Court’s decision provided a basic framework that changed the state tax landscape. However, the changing state tax landscape and the attempt on the part of some jurisdictions to push the scope of the Wayfair decision has created new issues and challenges. The state courts relying on the Court’s framework will be required to address these unanswered questions. Therefore, it’s too early in the process to conclude whether the Wayfair decision was a favor or a burden.

[43] The South Dakota statute required the collection of sales tax.

[45] The Court found that the South Dakota tax system included features that were designed to prevent undue burden on interstate commerce. Specifically, the statute had a safe harbor for those who transacted limited business in the state. Second, the act could not be applied retroactively. Third, the adoption of the Streamlined Sales and Use Tax Agreement reduced compliance and administrative costs, provided uniform definitions, and created a simplified tax rate structure. Wayfair, 138 S. Ct. at 2099.