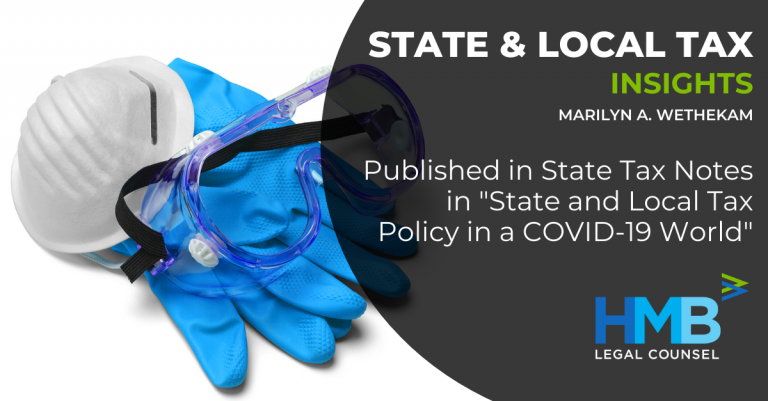 In State Tax Notes' Board Briefs, Marilyn A. Wethekam discusses "State and Local Tax Policy in a COVID-19 World".

Download the full Board Briefs by State Tax Notes here.

2020 began on an optimistic note. The economy, in several sectors, was thriving. States over the last couple of years had seen continued revenue growth and even in some cases were experiencing a surplus for the first time in several years. All of the optimism for economic growth and increased revenue came to an abrupt halt in late first quarter 2020 with the onset of COVID-19. The initial revenue predictions were dire as portions of the economy were effectively shut down.

Thankfully, the revenue decline has not been as severe as initially predicted and even a handful of states are seeing revenues exceed their initial expectations. While there may be a few bright spots, the majority of states are forecasting double-digit percentage declines in revenue for fiscal 2021. The revenue decline is only one of the issues states are facing. State and local governments are on the front lines, bearing the increased costs of the healthcare, social services, and educational needs that are a result of COVID-19. These additional expenses have required both the states and, more importantly, local jurisdictions to shift their limited revenue resources to address these expenses. While the federal government may provide some additional financial relief, the question is the impact all of this will have on both long-term and short-term tax policy at both the state and local level.

As we move into the legislative season, states are grappling with what, if any, tax changes will be required to fill immediate revenue needs and provide a sustained future revenue stream. The Coronavirus Aid, Relief, and Economic Security Act (P.L. 116-136) is intended to stimulate the economy by providing tax relief to businesses in the form of NOL changes, increasing the deduction for interest expenses, expensing capital assets, as well as clarifying the tax treatment of Paycheck Protection Program loans. For those
states that automatically adopt the provisions of the Internal Revenue Code these business incentives have a direct impact on corporate income tax revenue. As a result, from a short-term revenue perspective states may take a step back and evaluate decoupling from provisions of the CARES Act. Similarly, that analysis may also include a reevaluation of the states’ conformity with some provisions of the Tax Cuts and Jobs Act.

Other long-term policy considerations may be to impose an entity-level income tax on flowthrough entities or a shift to a combined reporting regime for separate-return states. It is important to note that policy considerations surrounding the generation of additional revenue should be balanced with economic development needs. Therefore, it may also make sense to not exclusively focus on changes that are directly aimed at increased revenue, but rather to also evaluate restructuring the corporate income tax by taking into consideration the changes in existing business models that have resulted from COVID-19. Thereby, adopting provisions that would both generate revenue and expand the economy in general.

Fortunately, the decline in sales tax revenues was not as sharp as predicted. Rather, there appears to have been a shift in the source during the pandemic of those revenues as a result of the increase in online buying. States will continue to rely on excise taxes, particularly sales taxes, to provide the revenues needed to plug the budget holes that have resulted from COVID-19. Taxing traditional services is not a new concept. However, revenue needs and policy considerations may require the expansion of the sales tax base to capture new business models. There are several current proposals to expand the tax base to include digital services such as digital advertising or data collection. Whether expanding the sales tax base to encompass these types of activities will withstand a legal challenge remains to be seen. In the short term those legal challenges may not silence the policy discussions surrounding the expansion of the tax base. Nontraditional excise taxes are also providing new revenue streams. For example, online sports betting is now legal in more than 50 percent of the states. The taxes imposed on sports betting provide a new revenue stream for both state and local jurisdictions. Similarly, the legalization of recreational marijuana has created an entirely new opportunity to generate revenue both at the state and local level.

Finally, one cannot lose sight of the impact COVID-19 has had on local tax revenues. Revenues from hotel occupancy taxes, amusement taxes, and parking taxes, to name just a few, have dwindled because of the various mandated shutdowns. As with the states, local government expenses have risen because of the need to address healthcare issues, social service, and education needs. Local jurisdictions may also be constrained by state laws that limit the type of taxes that may be enacted. Local jurisdictions that are constrained may seek to increase fees that are charged for services or impose new fees under the guise that they are not taxes. Those jurisdictions that have home rule authority may explore expanding existing tax bases to capture such items as streaming services under the amusement tax or expand local sales taxes to apply to cloud products. In all cases, one thing is for certain: Taxpayers are likely to see an increased enforcement effort at both the state and local level.