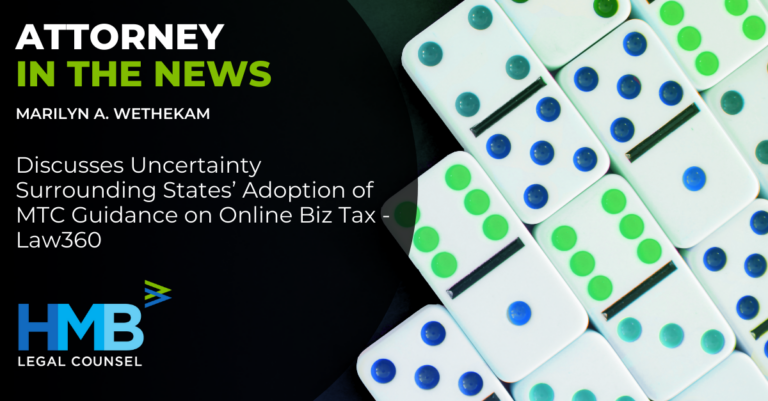 In an article by Law360, Marilyn A. Wethekam discusses the ambiguity found in the updated Multistate Tax Commission (“MTC”) guidance regarding when internet business activities exceed federal protections against state income tax.

“Key portions of the MTC's reinterpretation of the Interstate Income Act provide that cookies downloaded and used for purposes other than solicitation of sales exceed the law's protections, and states could extrapolate that into sales tax contexts,” Marilyn said at the National Association of State Bar Tax Sections' annual meeting in Nashville, Tennessee.

The Interstate Income Act, enacted in 1959, insulated businesses from tax on net income when soliciting tangible personal property orders is their only connection to a state. In August, the MTC updated its interpretation of the law and said that cookies, or identifying pieces of data, used for certain activities, such as acquiring information for product development, go beyond solicitation of orders. The guidance also considers a business' placement of cookies on customers' devices to constitute an in-state business activity.

Marilyn commented that the updated statement might encourage states to adopt a concept known as "cookie nexus," where a company can be considered to have physical presence for sales tax purposes if its cookies are located on devices inside a state. If a state chooses to take such a position, it's unknown if they may apply it retroactively.

"I give them some credit by trying to modernize a 1959 law," Marilyn said. "But I think by doing it, they've complicated matters greatly."

She added that some tax professionals have expressed worries about the possibility of states offering a new Interstate Income Act interpretation without public notice — a concern she shares herself. She continued saying, "There's no real guidance around this."