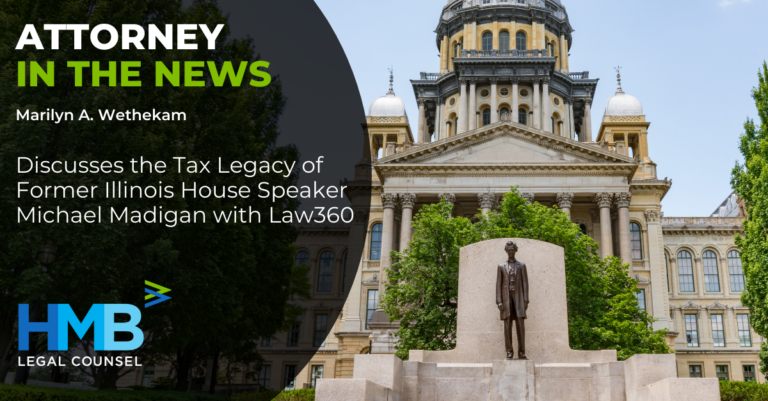 Former Illinois House Speaker Michael Madigan was recently voted out of his leadership post, leaving a complex tax legacy to his nearly four-decade reign that included sales tax restructuring and failures to create the progressive income tax code he envisioned.

Madigan, a Democrat from Chicago, ceded the gavel on Jan. 13 after House members elected Rep. Emanuel "Chris" Welch, D-Westchester, the first Black lawmaker to become speaker in Illinois. Madigan held the chamber's top spot for all but two years since 1983, during which he wielded tight control over the House committees and calendars, and it was understood that no bill would hit the floor without first receiving his imprimatur.

Tax policy was no exception. Some of the more significant tax measures that occurred on Madigan's watch included a switch to single sales-factor apportionment for corporate income tax and an overhaul of local sales taxes that saw the state assume the tax administration while permitting localities to levy different rates. Not every tax bill that was voted on in Springfield was a priority for Madigan, who is also a property tax attorney and co-founder of Madigan & Getzendanner, but his role as the gatekeeper for the legislation was apparent.

Single-sales factor generally favors in-state companies and exports corporate tax burdens by discounting the amount of property or payroll a business has in the state when apportioning its income. And during Madigan's tenure, the House never voted on several measures to revamp the state's false claims act that allows whistleblowers to file claims alleging that companies underpaid their tax obligations, Marilyn Wethekam, told Law360.

Illinois is one of the few states that allows tax complaints to be filed under its false claims act, but it lacks some of the safeguards that others have. The Illinois law has allowed one plaintiff's lawyer to bring more than 1,000 small-dollar tax false claims suits to try to entice companies to settle rather than litigate the issue. Multiple bills that attempted to curtail that practice, whether through thresholds or other limitations to the law, all failed to pass, Wethekam said.

"That's one where he did not help the corporate community, in trying to reform our qui tam statute here," she said, adding that the measures were supported by pro-business and taxpayer organizations. "That legislation never hit the floor, for whatever reason."

In other areas of tax policy, Madigan did steer some modernization of the Illinois tax code, as the state expanded its tax base to capture online transactions, marijuana sales and sports gambling in recent years, Wethekam said.

How Welch, the new speaker, will run the chamber remains to be seen, although he has indicated that he may be open to loosening the House rules and decentralizing some power in the chamber.

"Madigan ruled with an iron fist," Wethekam said. "I'm not sure anyone following him will have that same kind of control, or certainly not initially."