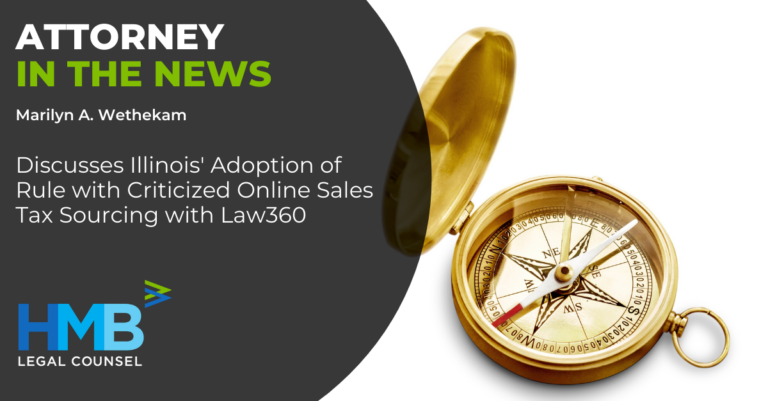 In an article by Law360, Marilyn A. Wethekam discusses the Illinois Department of Revenue's decision to carry out a law that critics say could impose a discriminatory tax sourcing regime for online sales that favors certain in-state sellers.

The rule carries out a widely criticized 2019 law requiring remote sellers and marketplace facilitators without a physical presence in Illinois to employ destination sourcing for the retailers’ occupation tax starting Jan. 1, 2021, while keeping the tax origin-based for in-state sellers or for sales fulfilled from in-state inventory. Out-of-state sellers with a physical presence in Illinois may also incur a state use tax obligation, according to the rule.

“As a result of these differing tax obligations, it is critical that retailers examine their selling activities to determine their specific tax liabilities,” the regulation said. “This is especially important for retailers that engage in multichannel retailing.”

Marilyn told Law360 that taxing similar deliveries at different tax rates solely based on the location of a seller or inventory may violate the U.S. Supreme Court’s 1994 ruling in Associated Industries v. Lohman . In that decision, the justices held that Missouri and its localities discriminated against interstate commerce by taxing goods purchased out of state at different rates from those imposed on in-state transactions.

“At some point, it may get challenged,” Wethekam said of the Illinois law.