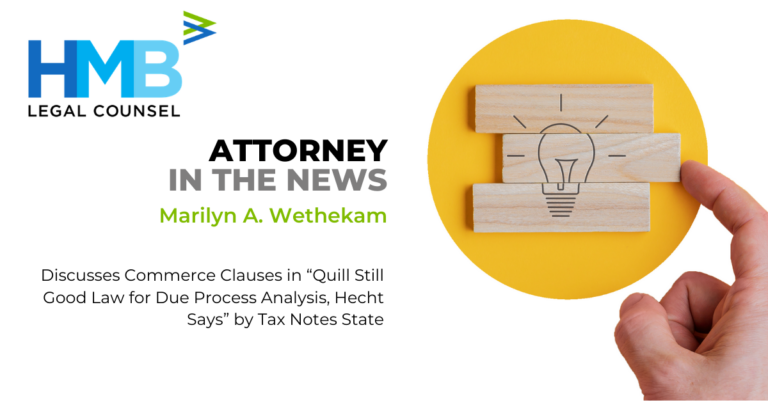 The U.S. Supreme Court will continue to look to the analysis in Quill Corp. v. North Dakota for due process clause purposes, according to Multistate Tax Commission Uniformity Counsel Helen Hecht.

The topic came up during a September 15 webinar hosted by the Federation of Tax Administrators. FTA Deputy Director Verenda Smith asked participants whether, in the wake of South Dakota v. Wayfair Inc., they had reason to think there will be challenges to state nexus thresholds or other jurisdictional rules.

“I think you’re going to see more due process, more minimum contacts issues come out of this than maybe commerce clause issues,” said Marilyn Wethekam of Horwood Marcus & Berk Chtd. She said Wayfair may have resuscitated due process clause considerations for state tax purposes after some tort cases that had nothing to do with tax had started the process.

Hecht said she believes this is important because, while the Supreme Court was changing the jurisdictional line from physical presence in the 19th century to minimum contacts with International Shoe Co. v. Washington to purposeful availment with Burger King Corp. v. Rudzewicz, “Quill and Bellas Hess were always just sort of out there” going against the Court’s principled basis for its rulings. Specifically, the Quill Court retained the physical presence standard for sales and use taxes by distinguishing due process and commerce clause nexus principles; when the decision came down, many people argued that the physical presence standard was the rule for all state taxes, Hecht said.

“Now we have confirmation that, yes, Quill was just unique in that it retained physical presence well into the 20th and 21st centuries,” Hecht said. The Court had said the question under the commerce clause is burden, she said, although the Court has now balanced burden against the harm of effectively exempting a larger portion of commerce from state taxation and giving a big advantage — as Quill did — to some group in the economy.

“The Court has now erased that outlier,” Hecht said. She added that she believes what that means is that the Court can apply one set of principles. “It’s probably useful now for us to expand our view a little bit and look at how the Court treats jurisdiction generally, both Document generated for Verenda Smith Page 1 of 2 Doc 2020-35914 (2 page(s)) (C) adjudicatory and regulatory jurisdiction,” Hecht said.

Post-Wayfair, “states need to start thinking about what does this absence of a really restrictive constitutional standard mean” and start looking for the connection between what the state is attempting to tax and where the thresholds should be drawn, Hecht said. Even if economic presence is all that’s needed to give a state jurisdiction to tax, she said, the state tax nexus standard still needs to be clear and fair.

“I think we have so long thought about jurisdiction in constitutional terms,” Hecht said. “We really need to start thinking about it in terms of state law.”

Hecht made a pitch for the MTC’s factor presence nexus standard, which is supposed to constitute what a state believes is substantial nexus — that is, commerce clause nexus — for business activity tax purposes. Wethekam likened the factor presence nexus standard for income tax purposes to the sales and use tax thresholds that came out of South Dakota, but said it would be nice if states made some sort of determination of what is de minimis.

The conversation went deeper when Smith turned to North Carolina Department of Revenue v. Kimberley Rice Kaestner 1992 Family Trust, which she called a less-watched jurisdictional case decided by the Court one year after Wayfair. In Kaestner, the Court held that, based on the narrow facts of the case, North Carolina lacked jurisdiction to tax a New York trust whose beneficiaries in North Carolina had not yet received distributions.

“The Court looked at it purely on due process, as I read the opinion,” Wethekam said. When the case first started, all sides thought it might be a vehicle for getting a better interpretation of due process and how it applies at the tax level, she said. That didn’t quite happen; the Court focused on only the minimum contacts aspect of due process, and in the context of a specific set of circumstances.

But Hecht agreed about Wethekam’s point regarding due process. She pointed out that the legal analyses in both the majority and concurrence in Kaestner started with Quill — and “not with Quill commerce clause but with Quill due process” analysis.

“So let’s not forget that Quill is still good law for the due process clause, and the courts are going to look to Quill,” Hecht said. She added that she believes this is fine. “I think the due process analysis in Quill is sound” and “still pretty useful.”

“Maybe the Court took [Kaestner] to just reaffirm that, at least as far as the due process clause is concerned, Quill is still good law,” Hecht said.

“I think that’s the only reason they could have taken it,” Wethekam replied. “They didn’t make any law in it.” Also strange, Wethekam and Hecht said, was that rather than taking the case to overrule the lower court, the Supreme Court unanimously upheld the lower court decision.