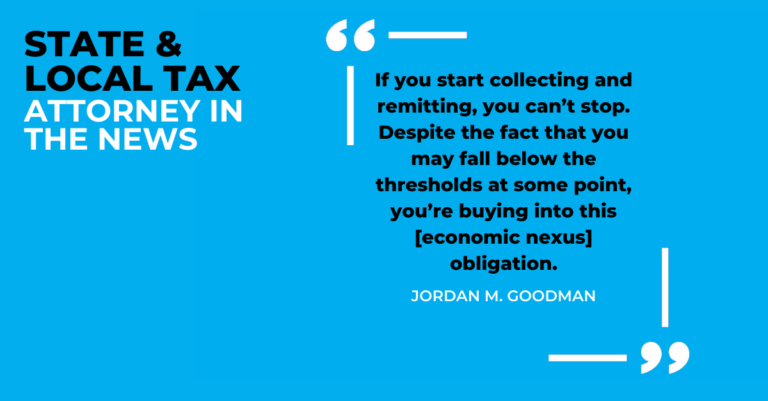 On June 21, 2018, the U.S. Supreme Court released its fateful decision in South Dakota v. Wayfair. The Wayfair decision upended decades of the physical presence standard for remote sellers for sales tax nexus and allowed states to require remote sellers (who exceed certain economic thresholds) to collect sales tax on sales into their state.

The decision was monumental in the sales tax world to say the least. Three years later, the novelty has worn off but the impact on businesses of all sizes, industries, and locations is still going strong.

To understand how the sales tax obligations of companies across the company changed due to the Wayfair decision, Sales Tax Institute surveyed the audience about their experiences. They also caught up with four sales tax experts including, Jordan M. Goodman, Rochelle Friedman Walk, M&A attorney at Aegis Law, Cameron Stearns, Executive Vice President and CFO at Mountain Rose Herbs, and Diane Yetter, President and Founder of the Sales Tax Institute, to find out the major challenges for businesses and predictions for the future of nexus.

Jordan sees a lot of confusion arising among his clients whose sales fall on the “borderlines” of economic nexus, fluctuating above and below the thresholds. This primarily affects smaller sellers whose sales may be inconsistent month to month, perhaps with one large sale that pushes them over a state’s threshold. Once you exceed a threshold, you have an obligation to register and collect tax. Because the energy and resources put towards taking those steps can be steep, Jordan advises, “If you start collecting and remitting, you can’t stop. Despite the fact that you may fall below the thresholds at some point, you’re buying into this [economic nexus] obligation.”

Read Part I in its entirety here.

View all parts of the series below.

Part II looks at the cost of compliance on businesses following the decision with an emphasis on how it has impacted technology needs and staffing.

Part III dives into marketplace nexus and the impact on marketplace facilitators and sellers' registration and collection requirements.

Part IV looks into the cost of compliance on businesses.