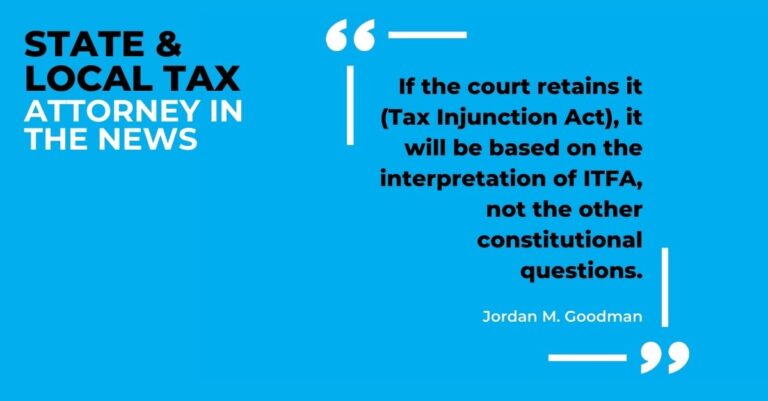 In this article by Law360, Jordan M. Goodman discusses the Tax Injunction Act and state tax issues being filed into federal court.

The complaint by the U.S. Chamber of Commerce, Internet Association, NetChoice and Computer & Communications Industry Association, filed Feb. 18, had been widely expected, but it contained a procedural twist. It was filed in federal court, a forum that could offer a more expedient process -- and, some state tax professionals think, a fairer result than a state court of administrative body.

But while filing in federal court may be expedient, it won't guarantee smooth sailing for the complaint, which asserts the tax violates the federal Internet Tax Freedom Act and the due process and commerce clauses of the U.S. Constitution. For a start, Maryland will likely argue that federal jurisdiction is block by the Tax Injunction Act, which generally bard federal courts from adjudicating state tax cases.

Jordan agreed that the Tax Injunction Act makes it difficult to get a state tax issue into federal court. However, he said his firm has extensively researched ways state taxpayers can get to federal court, and it is possible the trade groups' argument could apply.

Two of the ways, he said, are "if the payment is not technically a tax," and if the taxpayer "alleges discrimination in the form of benefits enjoyed by others but not the taxpayer." The trade groups are asserting the first argument and also asserting that their online members are being discriminated against because the tax is targeted only at them.

Jordan and others said the jurisdictional questions could turn on how the federal court views the role of ITFA in the case. ITFA, which dates to the late 1990s, bars the taxation of internet access and prohibits discrimination against digital commerce. The complaint asserts that the tax violates ITFA because it would fall only on large online companies selling digital advertising to their customers. It would not fall on companies selling advertising in other media, such as print or radio.

"If the court retains it, it will be based on the interpretation of ITFA, not the other constitutional questions," Jordan predicted.