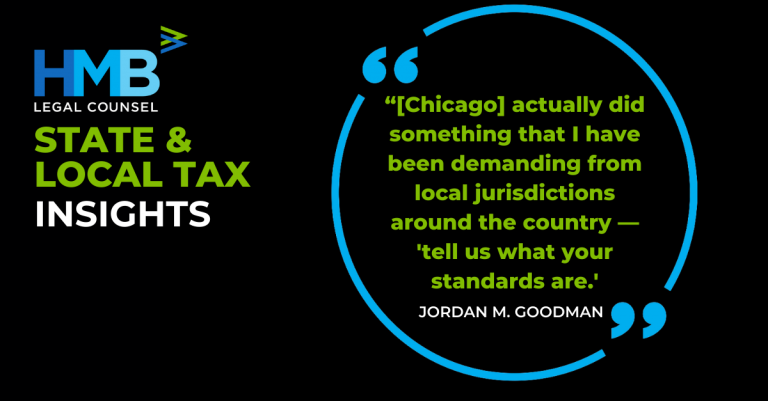 Speaking during the Virtual 2021 American Bar Association/Institute for Professionals in Taxation Advanced Sales and Use Tax Seminar on March 15, Jordan applauded the city for issuing the guidance.

The city “actually did something that I have been demanding from local jurisdictions around the country — ‘tell us what your standards are,’” Jordan said, going on to explain what he called the bulletin's "Wayfair-esque economic bright-line standard."

The corresponding bulletin, issued January 21 by the Chicago Department of Finance, explains that out-of-state entities that received less than $100,000 in revenue from sales to Chicagoans during the previous four consecutive calendar quarters won’t have to collect and remit the city's amusement tax, as applied “to amusements that are delivered electronically, such as video streaming, audio streaming and on-line games,” and its personal property lease transaction tax, as applied to nonpossessory computer leases. The safe harbor takes effect July 1.

Goodman observed that the city’s guidance is “the first one out of the box, so maybe it wasn’t put together exactly right, and maybe that’s an issue we can work on in other jurisdictions. But I still give them credit for jumping on it and putting it out there.”