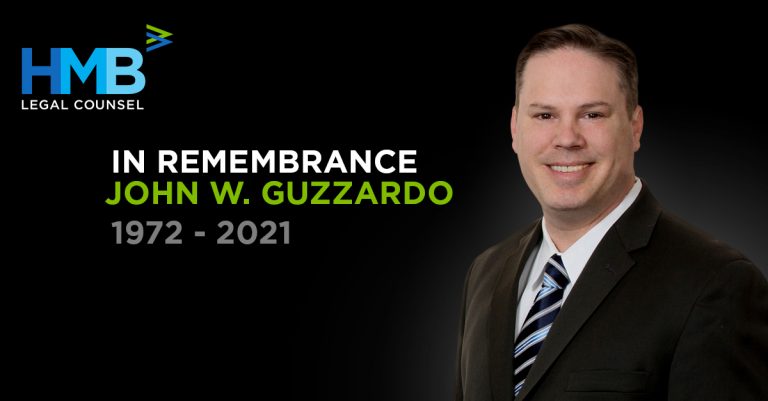 It is with great sadness that we inform you of the untimely passing of our dear friend and colleague, John Guzzardo. John passed away on Friday, June 4th at the age of 49 due to a car crash while on vacation with his family in California. John was a Partner at HMB, the Chair of the firm’s Litigation Group, a mentor to many and a friend to all.

John was a 2004 graduate of Chicago Kent College of Law, Illinois Institute of Technology and a 1994 graduate of Northwestern University. He started his legal career as a litigation associate in the Chicago office of Skadden, Arps, Slate, Meagher & Flom LLP where he spent 5 years before practicing for nearly a decade at Shaw Fishman Glantz & Towbin, LLC. John joined HMB as a partner in the firm’s Litigation and Bankruptcy practice in 2018.

John was a gifted lawyer with an unwavering commitment to his family, friends and clients. He was a  talented litigator who held multiple leadership positions in the industry including serving as a member of the Chapter 7 Trustee Panel for the Northern District of Illinois. As Chair of HMB’s Litigation Group, John oversaw all aspects of the practice including, the hiring, development and promotion of junior lawyers, the growth of the practice and the development and implementation of strategic initiatives. John accomplished this while building his practice and his reputation litigating complex bankruptcy matters.

Prior to becoming an attorney, John was an accomplished actor in Chicago and Los Angeles appearing with Steppenwolf, Touchstone/Organic and Northlight theatres. John’s passion for theatre, film, street art and science fiction was secondary only to his love for his family. John was a genuine and kind person with a magnetic personality. John was a character, both on stage and off, and he had an immense impact on those fortunate enough to know him. He had an infectious enthusiasm and a booming laugh that could win over anyone who came into his orbit. He was an exemplary lawyer, colleague, friend, husband and father who made all of our lives better for having known him.

Our thoughts and prayers are with John’s family. The Guzzardo family has set up a fundraiser here to support the education of John's son, Giovanni, beyond initial expenses. The balance of the funds raised will go to his college and continued education.