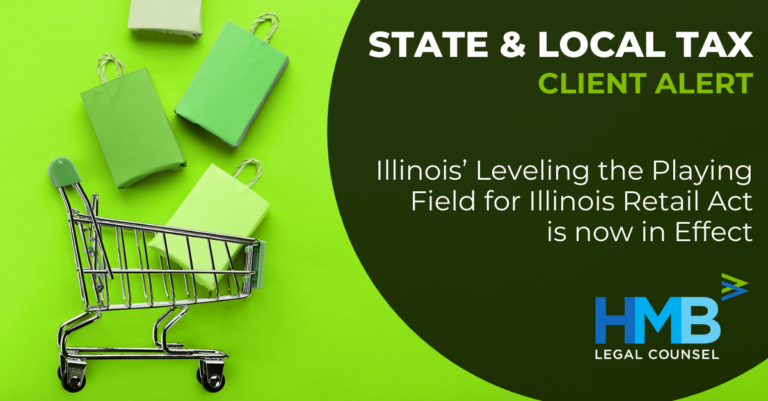 Illinois legislation impacting sourcing rules for marketplace facilitators, sellers, and remote sellers- the “Leveling the Playing Field for Illinois Retail Act”- is now in effect for 2021 and Illinois Retailers’ Occupation Tax (the “ROT”) returns will be due soon.  The Illinois Department of Revenue has made a resource page available for affected retailers and marketplaces.

As we discussed in June 2019,, the original Act was a renewed attempt by the state to solve a longstanding issue with the ROT. Unlike most states, for purposes of local tax rates, transactions are sourced to Illinois localities using an origination sourcing method- where the totality of selling activity occurs- rather than a destination sourcing method (the location of the purchaser). With the adoption of economic nexus for sales tax, the state has been working on ways to resolve how local tax rates apply to transactions where a seller lacks any physical presence in Illinois.

Amendments to the Act also address a relatively new problem regarding marketplace facilitators. Prior to the adoption of these amendments, marketplace facilitators were only permitted to collect and remit the Illinois use tax on sales made to Illinois customers. To the extent an Illinois retailer sold through a marketplace, that retailer might have been exposed to the entire ROT amount imposed on the sale. No credit was available for use tax previously collected by marketplaces, leaving Illinois retailers responsible to make up as much as 10.25% on a transaction out of pocket.

The Department has developed a flowchart illustrating how amendments to the Act that went into effect on January 1, 2021 resolve these concerns. Now, a marketplace facilitator will be treated as a retailer on transactions made through its marketplace. Thus, Illinois marketplace sellers are no longer liable for uncollected ROT when sales are made through a marketplace. For remote sellers (those sellers that do not have physical presence but whose sales to Illinois purchasers exceed 200 transactions or $100,000 in sales) that do not sell through a marketplace, the ROT is now sourced to the location of the purchaser.

While the Act undoubtedly resolves the state’s concerns, it creates new problems. In Associated Industries of Missouri, et al., v. Lohman, the United States Supreme Court explained that states “may not tax a transaction or incident more heavily when it crosses state lines than when it occurs entirely within the State[.]” In Associated Industries, Missouri localities imposed local sales tax rates ranging from .5% to 3.5%. For out-of-state sellers, a flat 1.5% additional use tax rate applied in lieu of the local sales tax rates. The problem, of course, was that some in-state sales were subject to only the local rate of .5% whereas interstate sellers were subject to the flat 1.5% rate. This, the Supreme Court held, was unconstitutional.

The same problem appears present with the new Illinois rules. An Illinois retailer could be located in a low rate locality, sell to a high rate locality, and because it is an Illinois retailer, only be subject to the low rate based on the origin-sourcing rules. A similar retailer located in another state selling to the same customer in the high rate jurisdiction would, however, be subject to the higher destination rate. Thus, notwithstanding the simplicity associated with destination sourcing rules, constitutional concerns will persist with the Act as currently written.

We expect this new legislation will influence taxpayers in a handful of ways. A number of taxpayers, particularly marketplace facilitators and sellers, will be relieved at the fix to the marketplace sellers’ abilities to collect ROT on behalf of sellers. Some remote sellers will undoubtedly consider challenging the constitutionality of the Act. The majority, we suspect, will consider how to work within the confines of the Act to obtain the benefits afforded to Illinois retailers short of any legal challenge.

If you have any questions about the Leveling the Playing Field Act, please feel free to reach out to any member of the HMB SALT team.