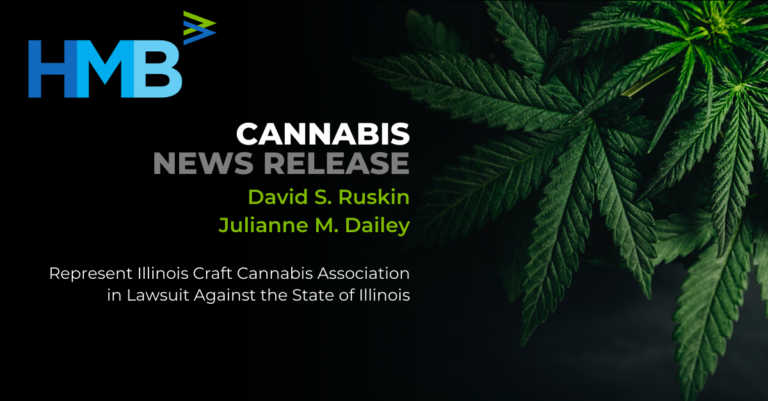 The Illinois Craft Cannabis Association ("ICCA") filed suit against the State of Illinois and Illinois Department of Agriculture on Monday, October 12 to compel the defendants to issue overdue licenses and provide injunctive relief to the cannabis craft grower, infuser and transporter applicants that were expecting licenses to be issued on July 1, under the law, but are now racking up millions of dollars in rent, payroll costs and fees. David S. Ruskin and Julianne M. Dailey are representing the ICCA in the litigation.

The ICCA is a member-founded, member-led, business-focused association for Illinois craft cannabis grower, infuser and transporter licensees, applicants and prospective applicants. They are focused on research, education and advocacy, cultivating a diverse, equitable, sustainable and professional craft cannabis sector that ensures quality and choice for Illinois consumers.

"Every day that passes without the licenses being awarded causes significant ongoing damage to the license applicants," the ICCA said in the complaint for a writ of mandamus filed in Cook County Circuit Court.

The State of Illinois is significantly beyond its statutory obligation to issue licenses by July 1, 2020 as defined in the Cannabis Regulation and Tax Act (410 ILCS 705). 455 craft grower applicants and 115 infuser applicants have seen their process hijacked by improper delay. Unlike the dispensary licenses (mired in their own separate litigation), the growers and infusers were required to have secured through purchase or lease a specific property prior to submitting their applications in April, causing many to now spend $10,000 or more a month to maintain that property without knowing when the licenses will be awarded, or if they will get one at all.

The State has failed to provide any communication to applicants that have invested upwards of $100 million in their license applications in total. Moreover, the State's delays mean that eventual licensees are losing approximately $40 million in revenue for each month of delay that can never be recovered, totaling more than an estimated $120 million since July 1, 2020 and the State will lose nearly $12 million per month in badly needed excise tax revenue for each month it delays.

In addition to asking for immediate issuance of craft grower, infuser and transporter licenses with the scoring, ICCA is also asking for uniform relief for all applicants that have lost, or are at risk of losing, their property, zoning and/or staff or are impaired in their ability to become operational within six months following licensing due to the State's delays.

You can read more about this lawsuit on the ICCA’s website or on Law360 (subscription required).