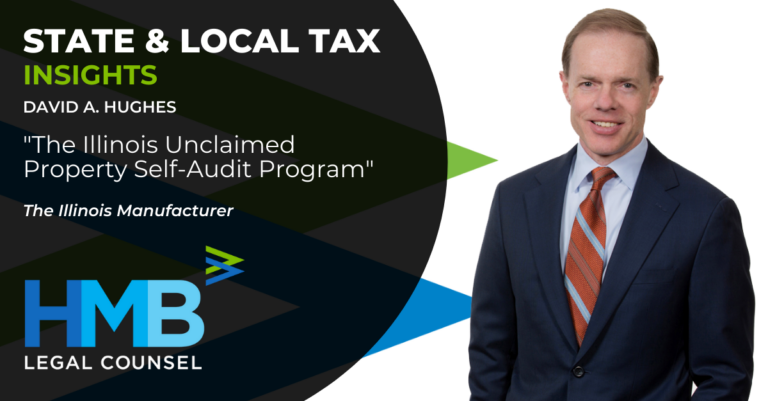 In an article written for the Illinois Manufacturers' Association, David A. Hughes discusses how to approach unclaimed property self-audits and provides a brief history and overview of Illinois’s Unclaimed Property Act.

You can read the full issue of The Illinois Manufacturer here.

By David A. Hughes

The Illinois Treasurer, which is the state agency that administers Illinois’ unclaimed property laws, recently sent letters to many Illinois businesses notifying them that they were the subject of an unclaimed property self-audit. These letters raise many questions. We have answers.

Let’s Start With An Easy One. What Exactly Is Unclaimed Property?

Unclaimed or “abandoned” property is property or accounts held by companies or financial institutions for which there has been no activity or contact with the “owner” regarding the property for a specified period of time (at least one year). After the designated period of time (referred to as the “dormancy period”) with no activity or contact by the owner, the property becomes unclaimed, and the “holder” (the company or financial institution) is legally required to turn the property over to the appropriate state. Unclaimed property can be tangible or intangible, and it includes a variety of items such as uncashed payroll or dividend checks, customer overpayments, contents of safe deposit boxes, and unredeemed money orders or gift cards.

Even if you are not currently contempYes. Illinois originally adopted its Unclaimed Property Act (“Act”) in 1961 and the Act has since been amended at various times.

Have There Been Recent Changes To The Act?

As a matter of fact, the Illinois General Assembly significantly amended the Act in 2017. The 2017 changes include:

Are There Specific Property Types That Manufacturers Should Be Concerned About?

In addition to the other examples already mentioned, manufacturers should also be concerned about commission payments, vendor checks, accounts receivable credit balances and workers’ compensation.

So If Unclaimed Property Is Not A Large Source Of Revenue For Illinois, Does That Mean That Manufacturers Do Not Have To Worry About An Audit By The Treasurer?

Definitely not – and in fact, it’s quite the opposite. The Illinois Treasurer has strong reasons to believe that many holders, including manufacturers, are not in compliance with Illinois unclaimed property laws, including the significant amendments adopted in 2017. For this reason, the Treasurer recently launched a self-audit program. In July, the Treasurer sent letters to a number of Illinois based businesses to alert them that they might have unclaimed property obligations that have not been properly reported. These letters ask the businesses to identify and pay all unreported unclaimed property within 90 days. The letters also noted that the Treasurer has contracted with Kelmar Associates, a private audit firm, to assist with the self-audit program. The Treasurer is expected to issue another round of these letters by the end of 2021.

Wow. That Sounds Serious. Is This A Typical Audit?

No. Technically, it is a self-audit. It is also not a voluntary disclosure agreement because the Treasurer has specifically identified certain holders that it believes are not in full compliance with Illinois unclaimed property laws.

How Exactly Did The Treasurer Identify These Holders?

The Treasurer generally identified three types of holders for the self-audit program:

Based on anecdotal evidence, virtually every company that has been contacted so far is a sizeable business based in Illinois.

So There Is A 90-Day Period To Complete The Self-Audit. Is It Possible To Get An Extension? And What If A Company Ignores One Of These Letters?

As long as a company acknowledges the self-audit notice and indicates a willingness to participate in the program, the Treasurer has generally granted a 6-month extension to perform the necessary review of records. As far as what will happen to a company that ignores the self-audit notice... it is hard to say at this point, but it would not be a surprise if the Treasurer engages a third-party to perform a full-blown audit of the company.

So Let’s Say I’m A Manufacturer That Receives A Self-Audit Notice. Now What Do I Do?

There are several things that you need to do. The first is to identify the unclaimed property types that are relevant for a manufacturer and the associated accounts where those properties reside. This will likely require a discussion with various departments, including treasury, accounting, finance, accounts payable and accounts receivable. It will be necessary to review the general ledger to determine relevant property types such as payroll, accounts payable and receivables. It will also be necessary to understand how the company handles stale dated items within each of these accounts.

After the potential unclaimed property population is identified, it is then necessary to research the disposition of each transaction to determine whether the property is in fact unclaimed. For example, if a voided check is identified, it will be necessary to determine whether there is documentation to show that the check was issued in error or otherwise resolved through a different payment. Likewise, for accounts receivable, there might be documentation to show that a credit was posted in error. The burden is on the holder to produce the necessary documentation to remove an item of unclaimed property from the overall population.

Finally – and this applies not only to the self-audit, but to routine unclaimed property compliance as well - it is necessary to locate and notify the owners of the unclaimed property through issuance of what are called due diligence letters. The Treasurer has issued rules setting forth what must be included in a due diligence letter, including identifying the nature and value of the property along with a statement that the property will be turned over to the state.

Is There Anything Else That A Holder Should Know About The Self-Audit Program?

If you receive a notice, please do not ignore it. A self-audit is far preferable to a third-party audit.

Please reach out to David with questions.