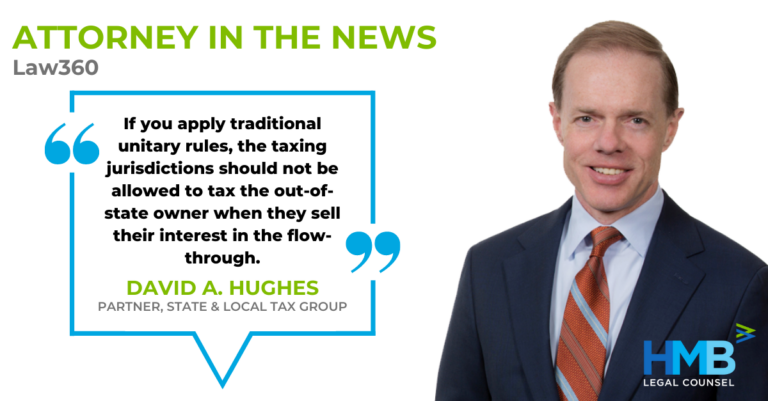 The below excerpt is from Maria Koklanaris’s article, “3 Things To Know About State Taxation Of Partnerships Now” published by Law360 on April 15th, 2022. Read the full article by Law360 here (subscription required).

One of the most relevant and complex issues in state tax today is how states should tax partnerships. With a frequent lack of clear guidance, state tax partnership law often gives itself to controversy.

Recently, the U.S. Supreme Court denied a petition from Ferrellgas Partners LP that claimed New Jersey’s partnership filing fee was unconstitutional and that a conflict existed between competing Supreme Court precedents. David A. Hughes commented on the decision saying, “The court opened the door to this idea of a local fee not being subject to the internal consistency test. And now it's a matter of: How do you define what a local fee is versus an interstate fee?”

Another emerging development in state tax partnership law involves the Massachusetts Supreme Judicial Court. It is set to decide whether the state’s Department of Revenue has the statutory authority to tax capital gains realized by an out-of-state corporation. Similarly, a high-profile matter was decided by a New York state appeals court. The court affirmed the New York City Tax Appeals Tribunal’s ruling that capital gains realized by a Goldman Sachs unit on the sale of its interest in a New York City-based business incurred general corporation tax.

David said both cases involve an out-of-state owner of a pass-through business in which that owner had no nexus with the taxing jurisdiction and in which the owner and the business are not unitary with one another.

"And so, if you apply traditional unitary rules, the taxing jurisdictions should not be allowed to tax the out-of-state owner when they sell their interest in the flow-through," David added.

David noted the states are arguing that taxation here is not based on unitary concerns, but rather on whether the business being sold, referred to as the investee, is within the taxing jurisdiction. He pointed out that the appellate courts in both New York and Massachusetts have sided with the states and now practitioners are closely watching the Massachusetts high court.

"So far, the states are winning that battle," David said, but he expects a lot more controversy.

"I think that's huge," David said. "We're going to start seeing cases like that in a bunch of jurisdictions."