David A. Hughes
Partner | Board of Directors
Add to eBriefcase 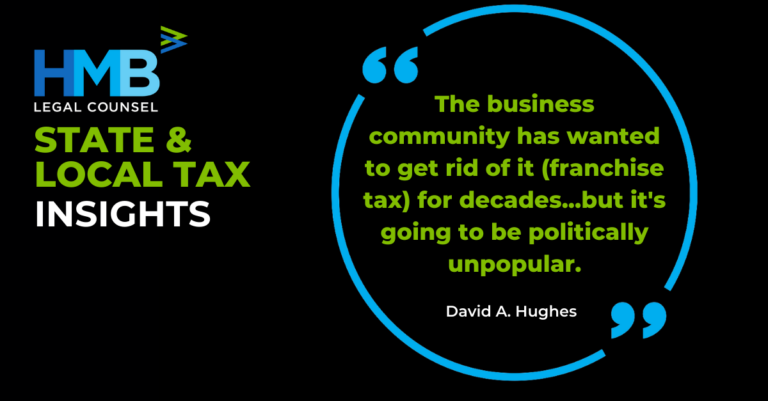 In this article by Law360, David A. Hughes discusses Illinois Gov. J.B. Pritzker's budget plan that would reverse several tax laws that the governor signed just two years ago, including a phaseout of the state's franchise tax.

All totaled, the budget's tax policy adjustments are projected to result in Illinois receiving an additional $932 million in fiscal year of 2022. While the proposed budget is just the beginning of the budget process for the fiscal year that begins July 1, Pritzker indicated that he believed every dollar from his suggestions would be vital to maintaining the state's services.

David told Law360 that the suggested reinstatement of the franchise tax was surprising because Pritzker backed its phaseout and it isn't a large revenue-raiser. According to the budget plan, reversing the franchise tax phaseout would generate $30 million in fiscal year 2022.

"The business community has wanted to get rid of it for decades," David said. He added that even if its reinstatement is "being done to raise revenue in a pandemic, it's going to be politically unpopular" among businesses.

Regarding foreign dividends, Hughes said that Illinois appeared to want to tax more GILTI by trying to "create a level playing field" between the treatment of foreign and domestic dividends while averting any constitutional issues that may arise from treating domestic dividends more favorably.

Hughes said that Illinois also previously put in a temporary cap for net operating losses, and what Pritzker is essentially offering is a deferral for deductions exceeding the cap that will hit the state's coffers once the limitation expires.

"It's good for today, but at some point those losses will get utilized," David said. "It's going to impact budgets down the road."