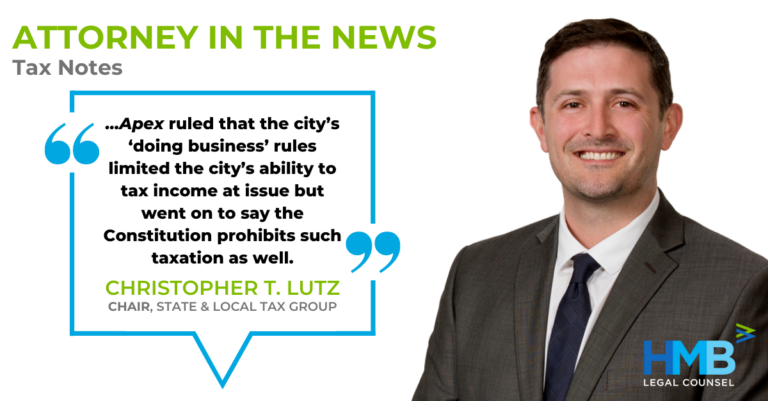 The following excerpt is from Andrea Muse’s article, “Michigan Tribunal: Company Has No Nexus With Detroit Under Wayfair” published by Tax Notes on August 23, 2022. Read the full article by Tax Notes here (subscription required).

On August 19, 2022, the Michigan Tax Tribunal ruled that a holding company, Apex Laboratories International Inc. (Apex,) does not owe city income tax because it does not have substantial nexus with Detroit.

Christopher T. Lutz, Chair of HMB’s State and Local Tax Group, told Tax Notes he was happy to see the tribunal take the approach he has been advocating for the post-Wayfair, noting that it concluded nexus is a fact-specific determination and that the commerce clause and due process clause nexus standards are much closer together because of Wayfair.

However, Chris noted he would caution against relying very heavily on this case, Apex Laboratories International Inc. v. City of Detroit, because he believes it hinges on Detroit-specific law.

Chris said the tribunal looked to the attributes of the partner rather than the partnership, like what the Massachusetts Supreme Judicial Court did in VAS Holdings & Investments LLC v. Commissioner of Revenue. He added,

“…whereas VAS Holdings ruled based on Massachusetts law but then went on to opine that such taxation would not offend the constitution, Apex ruled that the city’s ‘doing business’ rules limited the city’s ability to tax income at issue but went on to say the Constitution prohibits such taxation as well.”