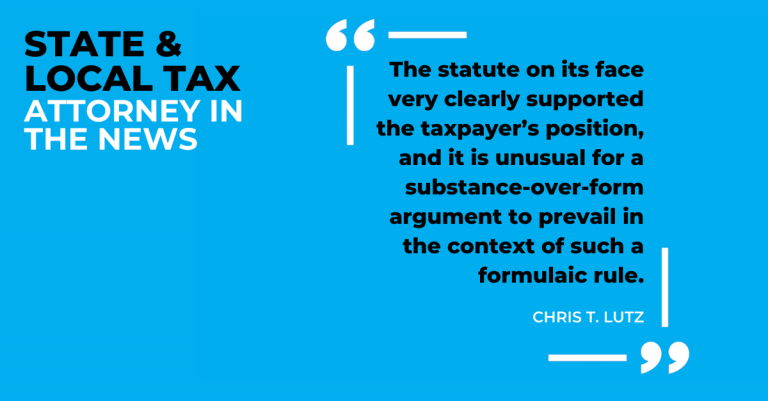 The Illinois Tax Tribunal ruled that a member of PepsiCo’s business group is a company conducting business within the United States, and its income is included in the unitary group’s income.

The tribunal held April 13 in PepsiCo Inc. v. Department of Revenue that Frito-Lay North America Inc. (FLNA) could not be considered an 80/20 company — an incorporated entity with less than 20 percent of its payroll and properties assigned to locations within the United States — and was required to be included in the Illinois unitary group of PepsiCo Inc. and its affiliates (PepsiCo).

PepsiCo had argued that the "payroll factor used to determine FLNA's eligibility as an 80/20 company should be calculated by including payroll costs reported by PepsiCo Global Mobility LLC (PGM LLC), a single member-LLC owned by FLNA . . . as compensation paid to expatriate [PepsiCo] employees."

The tribunal, however, concluded that PGM had no economic substance and had to be disregarded and was not the true employer of PepsiCo’s expatriate employees.

Chris told Tax Notes that “this discussion may have been a long time coming from the tribunal.” He noted that the tribunal said in a 2015 decision, International Business Machines Corp. v. Department of Revenue, that whether the substance-over-form doctrine was applicable or relevant in that case was “a question best left for another day.”

“The problem with this, of course, is the 80/20 test is by its very nature formulaic,” Lutz continued, wondering whether the Illinois Department of Revenue or the tribunal would permit similar flexibility if the facts were reversed. He said he highly doubted that the DOR would permit an entity to be excluded from the group if “a rigorous analysis of property and payroll results in an excess of 20 percent of the business activity in the U.S., but the entity is substantively a foreign operation.”

“The statute on its face very clearly supported the taxpayer’s position, and it is unusual for a substance-over-form argument to prevail in the context of such a formulaic rule,” Lutz said, adding that he would expect the taxpayer to appeal.