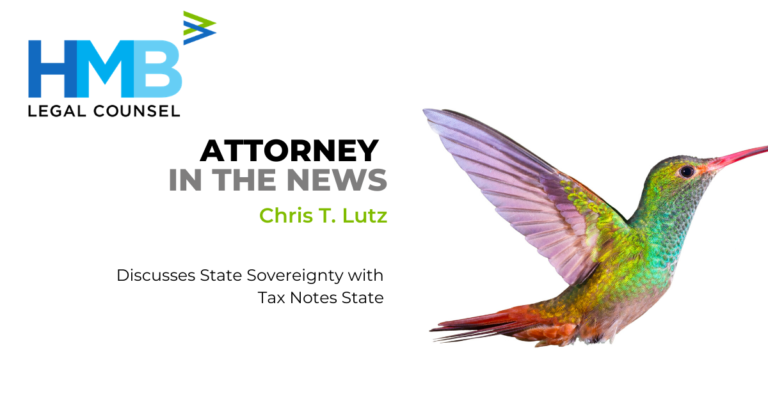 In this installment of his column, Internally Consistent, Chris discusses the impact of recent U.S. Supreme Court decisions affecting state sovereignty, including Hyatt and Dawson v.Steager.

This was the year of remote seller nexus, marketplace facilitators, state taxation of foreign income, and market-based sourcing becoming the majority rule for apportionment. It’s always difficult to summarize a whole year, so I’m not going to. Instead, I’d like to address one important theme that carried from 2018 into 2019: state sovereignty. This concept is always lurking in the background of state and local tax issues, yet rarely is it squarely addressed. It is likely to be an ongoing point of emphasis in the years to come.

Overturning Nevada v. Hall
To start the year, on January 9, 2019, the parties in the case of Franchise Tax Board v. Hyatt[1] argued before the U.S. Supreme Court. The question was whether the Court should overturn Nevada v. Hall,[2] which, in 1979, held that states are not constitutionally immune from suit in the courts of another state. Oral argument in Hyatt, of course, must be viewed against the backdrop of two other significant 2018 Supreme Court decisions: Murphy v. National Collegiate Athletic Association[3] and South Dakota v. Wayfair Inc.[4]

Taken together, Murphy and Wayfair served complementary roles. On one hand, Murphy struck down a federal law[5] as an invalid preemption of state authority. The supremacy clause,[6] Justice Samuel A. Alito Jr. ruled, did not allow Congress to regulate state activity. Instead, “every form of preemption is based on a federal law that regulates the conduct of private actors, not the States.”[7] On the other hand, in Wayfair the Court struck down longstanding precedent when it concluded the commerce clause[8] did not require a seller to have physical presence in a state for that state to require the seller to collect sales tax on purchases made by customers in the state. So the Supreme Court restricted the power of Congress to limit state action and it expanded the power of states to tax sales made in interstate commerce.

At oral argument in Hyatt, the ideological split at the Supreme Court was evident. In the first 20 minutes of the Franchise Tax Board’s argument, Justices Sonia Sotomayor, Stephen G. Breyer, and Elena Kagan pressed Seth Waxman of Wilmer Cutler Pickering Hale and Dorr LLP — who argued for the FTB — to explain what constitutional principle establishes sovereign immunity for a state in another state’s courts. Alito and Justice Brett M. Kavanaugh, too, asked Waxman to show where in the Constitution immunity from suit in another state’s courts could be found.

But Hyatt did not present a binary option of whether to increase or maintain limits on state sovereignty. Instead, the Court was presented with protecting one of two mutually exclusive state rights. The FTB, along with the amicus briefs of some 45 state attorneys general, argued that state sovereign immunity should prevail and that states entering the Union never intended to subject themselves to suit in another state’s courts. But as Erwin Chemerinsky, who argued for Hyatt, explained, a very different state right was also at issue. He asked: “Does Nevada have the sovereign power as a state to choose to not enter a compact, to define the jurisdiction of its courts, and to be able to provide a remedy when its citizens are injured by another state?”

On May 13 the Court ruled in favor of the FTB, overturning Nevada v. Hall.[9] “Hall’s determination,” Justice Clarence Thomas wrote, “that the Constitution does not contemplate sovereign immunity for each State in a sister State’s courts misreads the historical record and misapprehends the ‘implicit ordering of relationships within the federal system necessary to make the Constitution a workable governing charter and to give each provision within that document the full effect intended by the Framers.’”[10] The Constitution thus “fundamentally adjusts the States’ relationship with each other and curtails their ability, as sovereigns, to decline to recognize each other’s immunity,” he wrote.[11]

Breyer, joined by Justices Ruth Bader Ginsburg, Sotomayor, and Kagan, dissented. The major thrust of the dissent was simple: States are not required to grant immunity, as such a requirement would “imply a diminution of . . . sovereignty.”[12] While comity generally provides relief among sovereigns, it is not mandated.[13]

It’s therefore possible to read Hyatt as neutral on the question of state sovereignty. While states may not be hauled into foreign courts, they may also not protect their citizens against foreign states even when representatives of those foreign states violate the rights of a state’s citizens within its own borders. Indeed, in Hyatt, the FTB’s auditor harmed Gilbert Hyatt within Nevada’s borders. Hyatt, a Nevada citizen, is now without any recourse despite the damages he incurred.

But I think if weighing the two sides, it is hard to avoid the conclusion that the Court erred on the side of strengthening state sovereignty in Hyatt. A state’s interests in protecting the rights of its citizens against intrusions is really more about the rights of citizens, not states. Sovereign immunity, let alone in the courts of another sovereign, is arguably at the core of state sovereignty.[14]

Hyatt involved a suit seeking damages against a California agency. But Thomas’s decision goes further than limiting actions for damages in a foreign state. He wrote that “States retain their sovereign immunity from private suits brought in the courts of other States.”[15] It is odd, then, that the 16th Judicial Court of Virginia, on October 9, dismissed a taxpayer’s suit against Massachusetts in a Virginia court on the basis that the court lacked jurisdiction over Massachusetts as a matter of due process under the 14th Amendment.[16] The court did not rely on Hyatt, but instead concluded that Massachusetts lacked the requisite contacts with Virginia to be brought into court.[17] While the Virginia court was probably wrong that it did not have jurisdiction over Massachusetts as a matter of due process, its holding does bring to mind Chemerinsky’s explanation at oral argument in Hyatt that comity, personal jurisdiction, and the full faith and credit clause[18] each act as substantial barriers to suing a state in another state’s courts, thus obviating the need for total sovereign immunity.

States’ ‘Carefully Constrained’ Authority Like Hyatt, the Court in Dawson v. Steager, faced two different sovereign prerogatives: the right of a state to afford its own employees particular benefits and the right of the federal government to prohibit discrimination by a state against its own employees. Unlike the federal preemption disallowed in Murphy, on February 20, the Supreme Court struck down a West Virginia law as violating 4 U.S.C. 111 (“section 111”), which prohibits discriminatory taxation of federal officers or employees.[19] Justice Neil M. Gorsuch explained that “Section 111 codifies a legal doctrine almost as old as the Nation.”[20] In McCulloch v. Maryland[21] and thereafter, the Supreme Court generally understood the Constitution’s supremacy clause to prohibit state taxation of the employees of the federal government.[22] By the 20th century, “the Court softened its stance and upheld neutral income taxes — those that treated federal and state employees with an even hand.”[23] Section 111 was adopted in 1966 to reflect this understanding.[24] Because West Virginia’s law taxed some former state law enforcement employees more favorably than similarly situated federal employees, the law violated section 111. Gorsuch concluded: “The fact is, when States seek to tax the use of a fellow sovereign’s property, the Constitution and Congress have always carefully constrained their authority.”[25]

Dawson did not address the supremacy clause in depth, nor did it address the relationship between states. But Dawson and Hyatt are fairly consistent. Although Dawson involved a discriminatory tax of a federal employee’s pension benefits and the case was based on a federal statute specifically prohibiting such discrimination, much of the analysis could also be applied among the states. While Hyatt establishes sovereign immunity in the courts of another state, Dawson reflects the unequivocal intention to constrain the authority of states to tax a “fellow sovereign.”

2019 and Precedent
As we enter 2020, states are generally free from taxation and immune from suit in other states. They may harass, as in Hyatt, residents of other states without repercussion and they may impose tax obligations on the residents of other states, as in Wayfair, without those residents ever entering their borders. Congress, moreover, may be limited in its ability to do anything about this, as its supremacy clause powers purportedly extend only to private activity.

This all may be more a theoretical concern than a practical problem for taxpayers. It is incredibly rare for taxpayers to challenge state tax assessments in a foreign state. There are also relatively few federal statutes that affect state and local taxation. Those that do were enacted under Congress’s commerce clause authority, which was not scrutinized in Murphy and can generally be read to appropriately regulate private activity by setting forth how interstate private activity may be taxed.

The issue that may ultimately prove the most concerning is that two of the Supreme Court cases over the past two years involved overturning well-established precedent. The Court has shown a unique willingness to overturn its interpretation of the federal framework established by the Constitution based ostensibly on nothing more than shifting ideology. Hyatt especially was decided without any meaningful developments between 1979 and 2019 that would justify a change in law. I can only hope, considering Thomas’s renowned distaste for the dormant commerce clause,[26] that none of the other prongs of Complete Auto fall victim of the Court’s disregard for precedent.